9 Tips to Become a Better Driver

What makes a good driver? I don’t know whether I know. I’ve driven a few 100,000 kilometers, have deepened (racing) and extended (motorcycles, dirt bikes, ATVs) my skills, I fit stereotypes (German who loves BMWs)—and I’ve also screwed up (one full and two quarter accidents) and do cuss a lot. What I do know is that I’m a driver who cares.

As such I still do have a few ideas on what makes people better drivers, complementing earlier thoughts. During my ongoing travels I’m not driving very often, so I don’t want to see all the passion fade. 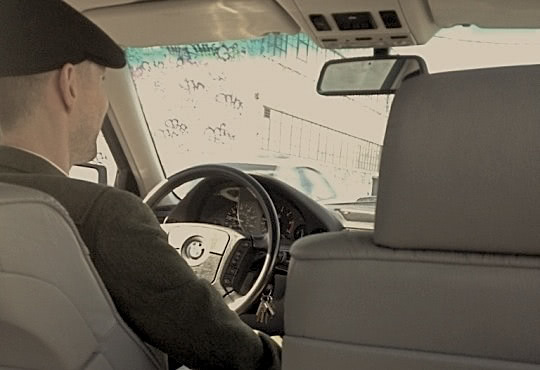 Figure: The author as seen from a not-yet-carsick passenger.

For a start, I’m very serious about all the points here. I’m laying them out because not every driver seems to be aware. Here: Get to know your car. Read the manual. Take the car out and do braking maneuvers (where allowed and safe). Take the car out and see how it reacts in rain or in snow. Few people know how their cars react in adverse conditions. That’s where we need to know them the most though, and where we learn the most.

2. Configure and Watch The Mirrors

A few months back I shared on Google+ how mirrors should be set up. It appeared to me that the few responses were coming from “oh, well I know how to set up mirrors on a car.” Maybe. That just stands in contrast to what we observe out there, where we rarely if ever see mirrors adjusted correctly. From Skip Barber:

Make sure the side view mirrors perform their intended function. They’re meant to view beside the car, not the side of the car. What do you really need to see; your rear bumper or the car in the next lane?

Adjust the side mirrors out just so you can no longer see the side of your own car. This should help reduce traditional blind spots.

I learned this the “hard” way, maybe ten years ago, when a good friend of mine teased me, to tears, because of my mirror setup. I now promise to give anyone here the same sort of tough love when I find them watching their own car in the mirrors.

Once set up right, mirrors become even more useful.

3. Use Turn Signals (When They Matter)

Simply watching the car in front is not safe, and gets unsafer and unsafer the shorter the following distance is. Try to look ahead and see what’s coming up 200, 500, or 1,000 meters ahead. One does still, immediately notice if the person in front is doing something unexpected, like braking unnecessarily because they don’t keep a sufficient distance.

The habit of looking ahead led me to dislike trucks and SUVs in front because they block too much of the view. I either increase my following distance—or try to pass. The first option is the better one. The second option is the one that people sometimes confuse for… aggression. Well.

I featured this in the aforementioned earlier post on driving but it’s worth repeating: Maintain a safe, comfy distance to the car in front.

The law and the experts are on the very defensive side (if in doubt, err on the side of following them). What I’ve always found interesting, to say it this way, is how law and experts ignore factors like probability (do they?). There’s a difference between maintaining a distance x when there’s lots of traffic and one can’t look ahead, for example, and when there’s little traffic and clear view on the road ahead.

6. Take Responsibility for Others

I think this is one of the most important qualities to have as a driver: Show responsibility for other traffic participants. I’ve seen what appear to be the most rowdy drivers zoom through traffic and they were safer to have around then the grocery shopper. Why? Because the zoomer was paying attention and anticipating everybody else’s move, while the shopper didn’t even know the color of his own vehicle.

It’s also something that I observed as a main difference between cultures: People exhibit very different levels of responsibility. One might enter Italy or Poland and think, “oh shucks, this traffic is crazy,” while all what happened really was that the chaos dial got increased—but also the responsibility dial. I found that the more rules people follow, the less responsibility they take. (Which may hold true in other areas as well.)

Don’t get carried away. If the person behind you honks, maybe they don’t mean you but the guy both of you are waiting for, the one who’s just for the love of it not ready enough to use the green phase. Or it is indeed about you. It happens. But in any case, let’s wait with gestures until we’re sure what was going on. (This is also a little note to self.)

Just an observation when looking for parking: Read the signs. I can’t count the number of times when, at busy times and in crowded neighborhoods, there were perfectly valid and legit parking spaces because people didn’t read the signs, and didn’t realize that that temporary “no parking” thing was only going to be in effect starting the next day. Or was until 4 pm. Or just got forgotten.

In memoriam Bill Strathearn †. Not for what I wrote here but for lots of conversations about cars and driving. Thank you.