CSS: The Maintenance Issue #1 and How You Can Avoid It

This post is based on a CSS usage analysis of the global Alexa Top 10 sites. As part of a general talk on web development and maintainability, I presented the findings at Google as well as at the webinale 09. A “maintenance guide” presenting the full set of common maintainability issues and tips to avoid them will be available on this site in a couple of days.

Let’s have a quick look at the theory. When it’s about web development, we usually deal with many HTML documents per site, whose layout is handled via CSS, and whose “behavior” is handled by scripting. The benefit of style sheet and script files is that they can apply to several HTML documents. This makes maintenance faster, easier, and cheaper.

Maintenance is fastest, easiest, and cheapest if you move all presentation into style sheets, and all behavior into scripts, as opposed to having all of that or even fragments in the HTML. Otherwise, if you want to change presentation or behavior, you may end up in the costly situation that you update HTML documents or templates. It’s recommendable to use the plural here, as in 99.99% of all websites and applications you don’t have a 1 template to 1 style sheet to 1 script file ratio.

Given that HTML changes are most expensive, and adding a performance dimension in terms of that you want to minimize the amount of external objects to keep the number of HTTP requests low (as they eat up bandwidth and time), in an ideal (but realistic) world you’d link just one style sheet and one script file from an HTML document or template. To further minimize chances that you have to change the HTML again, the CSS name should be either generic (for instance, standard.css) or functional (for instance, portal.css), and their target media types should not be specified in the markup.

I’m keeping this short and skip the in other cases obligatory note that you can still use more than one style sheet (by using @import, or, to save HTTP requests, by “compiling” your style sheets into a single style sheet), why Conditional Comments are so inadvisable, and that you should feel comfortable around caching. 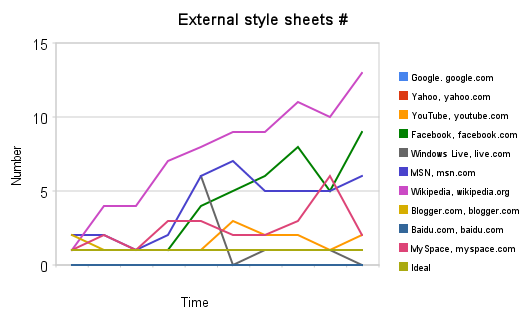 In almost every case measured, manual work went into the style sheet change, which equals cost—and that cost is unnecessary as shown under “Theory.” To avoid this unnecessary cost, reference just one style sheet from the HTML, without any media type definitions, and use a generic or functional name.

At the end of the day, and unlike the Alexa Top 10, you shouldn’t bother much about style sheet names and references.

I don’t claim that the roughly 50% “probability” for the Alexa sites to change their HTML documents or templates every 6 months for style sheet name or number modifications applies to every other site out there. I actually think these changes are significantly less probable on most other sites. However, considering the usually utter unnecessity of these changes as well as the “black hole” we’ve got in this sector—there’s little coverage on web development and maintainability—it seemed useful to raise awareness.

It’s also important to note that there will be reasons for some changes and decisions on these sites. For instance, Google, Yahoo, and Baidu never used any external style sheets (but instead style elements and attributes, which usually introduce different maintenance problems)—an approach chosen for performance and “homepage uniqueness” considerations. That is important to keep in mind, but note that it’s not the purpose of this post to discuss these decisions in more detail.

As a final note, the to-be-released maintenance guide will actually reveal a different issue as the “maintenance issue #1.” Style sheet naming and integration is more of a “secret #1,” since fortunately, more web developers know that bloated and presentational HTML code causes the worst maintenance issues. This post attempts to show that style sheet names and references can turn into a problem on its own, one that is both underestimated and underrepresented in coverage.