Another part of my random, untargeted book highlight series, here are some snippets from Edwin Abbott Abbott’s Flatland (1884).

Emphasis as it appears in the original work may be missing, and my own edits, though marked, may be broad. Then, important: By sharing these highlights I neither implicitly endorse nor recommend respective authors and their views. Assume that I know little of the authors, and that I have a nuanced view on the matter. (The only thing the highlights can tell is that—much like the books themselves—for some reason or other I found them of interest.) When detailed understanding of my views is important, ask me. 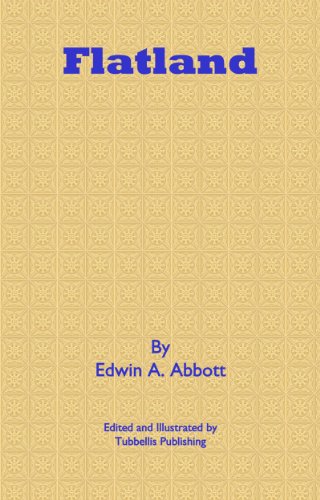 Dimension implies direction, implies measurement, implies the more and the less. Now, all our lines are Equally and Infinitesimally thick (or high, whichever you like); consequently, there is nothing in them to lead our minds to the conception of that Dimension.

Alas, how strong a family likeness runs through blind and persecuting humanity in all Dimensions! Points, Lines, Squares, Cubes, Extra-Cubes—we are all liable to the same errors, all alike the Slaves of our respective Dimensional prejudices .

In a word, to comport oneself with perfect propriety in Polygonal society, one ought to be a Polygon oneself.

these and a hundred other details of our physical existence I must pass over, nor do I mention them now except to indicate to my readers that their omission proceeds not from forgetfulness on the part of the author, but from his regard for the time of the Reader.

when scolding their children, they speak about right or wrong as vehemently and passionately as if they believed that these names represented real existences, and that a human Figure is really capable of choosing between them.

With Women, we speak of love, duty, right, wrong, pity, hope, and other irrational and emotional conceptions, which have no existence, and the fiction of which has no object except to control feminine exuberances; but among ourselves, and in our books, we have an entirely different vocabulary and I may almost say, idiom. Love then becomes the anticipation of benefits; duty becomes necessity or fitness; and other words are correspondingly transmuted.

no Linelander could ever pass another. Once neighbours, always neighbours.

“You ask me to believe that there is another Line besides that which my senses indicate, and another motion besides that of which I am daily conscious. I, in return, ask you to describe in words or indicate by motion that other Line of which you speak. Instead of moving, you merely exercise some magic art of vanishing and returning to sight; and instead of any lucid description of your new World, you simply tell me the numbers and sizes of some forty of my retinue, facts known to any child in my capital. Can anything be more irrational or audacious?”

Stranger: you see you do not even know what Space is. You think it is of Two Dimensions only; but I have come to announce to you a Third—height, breadth, and length.

Stranger: Then I came here, and how do you think I came?

I: Through the roof, I suppose.

Stranger: Not so. Your roof, as you know very well, has been recently repaired, and has no aperture . I tell you I come from Space.

You cannot indeed see more than one of my sections, or Circles, at a time; for you have no power to raise your eye out of the plane of Flatland; but you can at least see that, as I rise in Space, so my sections become smaller.

Sphere: We began with a single Point, which of course—being itself a Point—has only One terminal Point. One Point produces a Line with Two terminal Points. One Line produces a Square with Four terminal Points. Now you can give yourself the answer to your own question: 1, 2, 4, are evidently in Geometrical Progression. What is the next number?

Sphere: Exactly. The one Square produces a Something-Which-You-Do-Not-As-Yet-Know-A-Name-For-But-Which-We-Call-A-Cube with Eight terminal Points.

I have told you I can see from my position in Space the inside of all things that you consider closed. For example, I see in yonder cupboard near which you are standing, several of what you call boxes (but like everything else in Flatland, they have no tops nor bottoms) full of money; I see also two tablets of accounts. I am about to descend into that cupboard and to bring you one of those tablets. I saw you lock the cupboard half an hour ago, and I know you have the key in your possession. But I descend from Space; the doors, you see, remain unmoved. Now I am in the cupboard and am taking the tablet. Now I have it. Now I ascend with it.

Once more I felt myself rising through space. It was even as the Sphere had said. The further we receded from the object we beheld, the larger became the field of vision.

Awestruck at the sight of the mysteries of the earth, thus unveiled before my unworthy eye, I said to my Companion, “Behold, I am become as a God. For the wise men in our country say that to see all things, or as they express it, Omnividence, is the attribute of God alone.” There was something of scorn in the voice of my Teacher as he made answer: “Is it so indeed? Then the very pick-pockets and cut-throats of my country are to be worshipped by your wise men as being Gods: for there is not one of them that does not see as much as you see now. But trust me, your wise men are wrong.”

but I ventured to interrupt him. Not that I was wearied of knowledge. On the contrary, I thirsted for yet deeper and fuller draughts than he was offering to me.

I: My Lord, your own wisdom has taught me to aspire to One even more great, more beautiful, and more closely approximate to Perfection than yourself. As you yourself, superior to all Flatland forms, combine many Circles in One, so doubtless there is One above you who combines many Spheres in One Supreme Existence, surpassing even the Solids of Spaceland. And even as we, who are now in Space, look down on Flatland and see the insides of all things, so of a certainty there is yet above us some higher, purer region, whither thou dost surely purpose to lead me—O Thou Whom I shall always call, everywhere and in all Dimensions, my Priest, Philosopher, and Friend—some yet more spacious Space, some more dimensionable Dimensionality, from the vantage-ground of which we shall look down together upon the revealed insides of Solid things, and where thine own intestines, and those of thy kindred Spheres, will lie exposed to the view of the poor wandering exile from Flatland, to whom so much has already been vouchsafed.

I: is it, or is it not, the fact, that ere now your countrymen also have witnessed the descent of Beings of a higher order than their own, entering closed rooms, even as your Lordship entered mine, without the opening of doors or windows, and appearing and vanishing at will?

“Look yonder,” said my Guide, “in Flatland thou hast lived; of Lineland thou hast received a vision; thou hast soared with me to the heights of Spaceland; now, in order to complete the range of thy experience, I conduct thee downward to the lowest depth of existence, even to the realm of Pointland, the Abyss of No dimensions.”

“Behold yon miserable creature. That Point is a Being like ourselves, but confined to the non-dimensional Gulf. He is himself his own World, his own Universe; of any other than himself he can form no conception; he knows not Length, nor Breadth, nor Height, for he has had no experience of them; he has no cognizance even of the number Two; nor has he a thought of Plurality; for he is himself his One and All, being really Nothing. Yet mark his perfect self-contentment, and hence learn this lesson, that to be self-contented is to be vile and ignorant, and that to aspire is better than to be blindly and impotently happy.”

“You call yourself the All in All, but you are the Nothing: your so-called Universe is a mere speck in a Line, and a Line is a mere shadow as compared with—”

The lustre of the Monarch [the King of Pointland], who beamed more brightly than ever upon hearing my words, shewed clearly that he retained his complacency; and I had hardly ceased when he took up his strain again. “Ah, the joy, ah, the joy of Thought! What can It not achieve by thinking! Its own Thought coming to Itself, suggestive of Its disparagement, thereby to enhance Its happiness! Sweet rebellion stirred up to result in triumph! Ah, the divine creative power of the All in One! Ah, the joy, the joy of Being!”

“You see,” said my Teacher, “how little your words have done. So far as the Monarch understands them at all, he accepts them as his own—for he cannot conceive of any other except himself—and plumes himself upon the variety of ‘Its Thought’ as an instance of creative Power. Let us leave this God of Pointland to the ignorant fruition of his omnipresence and omniscience: nothing that you or I can do can rescue him from his self-satisfaction.”

“Upward, not Northward”—was the clue to the whole proof.

Yet I exist in the hope that these memoirs, in some manner, I know not how, may find their way to the minds of humanity in Some Dimension, and may stir up a race of rebels who shall refuse to be confined to limited Dimensionality.