Are You a Web Designer or a Web Decorator?

This has bothered me for a long time. The topic popped up when I thought about art and design, and it had to be covered when Roger asked whether we were designers or developers: Our industry is creative in coming up with new and esoteric job titles but an obvious one is missing—the “web decorator.”

“Web decorator” is not such a weird job title actually, it’s rather the canonical title for an apocryphal job, assuming that there are more crucial things to do than decorating. From my experience, it should be the job title for many web designers, even for some developers when they’re doing design stuff or stuffing code.

How to Tell Whether You Are a Web Designer—or Not

Here a two things that make sure you’re not just a decorator:

For You, Design Is Not a Matter of Taste

You know the reasons why you cannot use certain color combinations even if you “like” them, for example—classic—red and green while not using any other cues to deliver the message. You know that there are people who cannot read black text on “bright-black” background. You know that thick borders can distract and cause noise, as elements interact. You are creative and intuitive, but you also know what you’re doing. You know that, and you can defend your design decisions.

I couldn’t resist to illustrate the current situation in our industry regarding web designers and web developers—a rough, intentionally flawed feature by a man who himself added the title “web decorator” to his first job. 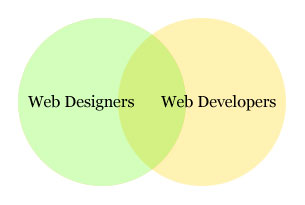 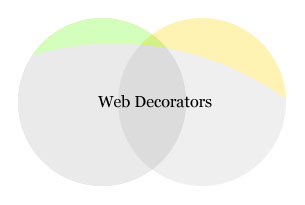 I know I simplified and exaggerated, as I like to do at times. But the point is, most of the sites out there do not carry the handwriting of a professional designer or developer. That doesn’t target personal sites covering topics other than web design and development, though, and I don’t know anymore why I added this:

A camel is a horse designed by a committee.

Take this with a grain of salt. Our industry is still young, and people cannot start as experienced design and development professionals. It is our responsibility to share our experience with them and to lead them. Also, decoration certainly has a place, including an “emotional component” that requires skills, too. Good practitioners could after all be called “professional web decorators”—without a bad aftertaste.