Google+ is shutting down, pulling everything with it as is the risk with foreign party content hosting.

In the beginning I enjoyed Google+ (much like I enjoyed Google Buzz, which also launched during my Google tenure), and I’ve used Google+. Much for spreading my writings, but also for contemplation—for more, overall, than I’ve then used Twitter.

Out of curiosity I’ve looked through the archives of my Google+ posts (the ones that survived a 2015 sweep); and then I wondered whether there’s anything I’d like to keep alive. And although I’ve changed and would put a few things differently now, I decided, why not. And so here’s an archive of some of my somewhat philosophical Google+ posts. They’re are a bit random, they’re not always strong, and yet they represent my thinking at the time.

Followed a hunch and poured all my transcripts and notes—about 100 pages—into a tag cloud generator:

A few weeks ago I hired a couple of contractors to compile a list of all organizations in the United States as well as the United Kingdom that research paranormal, psi, or extrasensory perception phenomena.

The interim outcome is [a huge spreadsheet].

While the data depends on how thorough my contractors were (and I wasn’t overly thrilled), I’m puzzled to see only six universities in here (granted they’re all proper universities). That number is low and doesn’t make much sense to me for three reasons:

Am I too lax in my definitions here? Does all that research now fall into different buckets? Did it go “underground”? What happened? 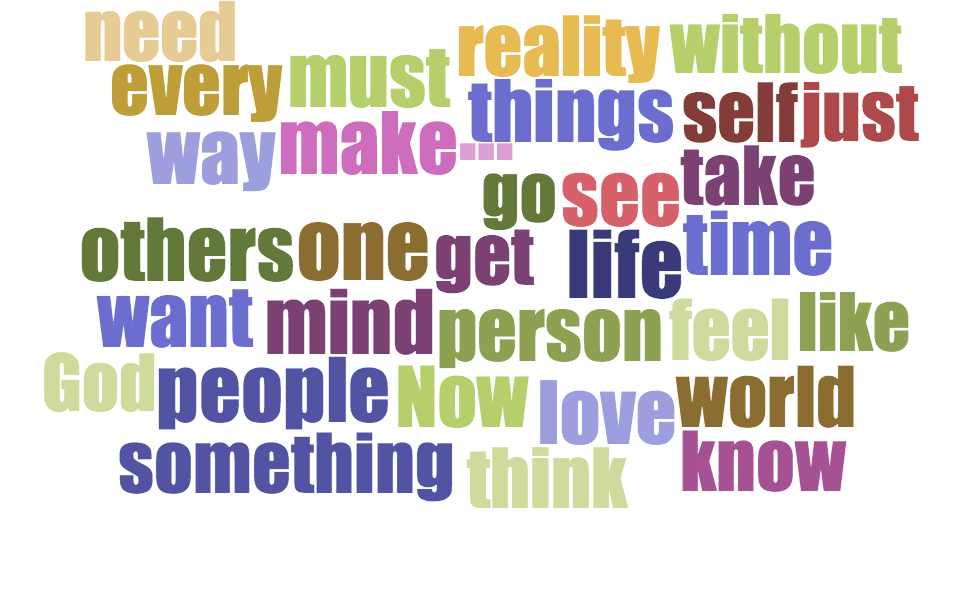 One and a half years ago I published a tag cloud generated out of the key concepts from about 100 pages of highlights and notes from my studies about philosophy, social sciences, psychology, spirituality, &c.

I’ve taken now 400+ pages (excluding those on more specific subjects like public opinion or wealth) to generate an updated version—the graphic below.

And as the only generator that could handle the load is a bit limited (ranking of common words, no reflection of frequency), I thought to at least include one attempt at a filtered indexable version:

One data point in a sea of data.

On the Limits and Problems of Science:

I don’t like that we kill millions of animals every year, that we’ve turned to rather think condescendingly about religion and spirituality, that we don’t see how life is about choice and not always about right or wrong so to have others tell us how to live, and I don’t like this lazy and hell-absolutely-not smart way of arguing by “show the proof!” interjections. That is, I think we have a problem with how we understand and run science (but not that there is no place for it).

If Christendom saw man as blighted by original sin, Darwinian and Freudian views see him as part of a flawed species in which individual life rests precariously, ever at the beck and call of the species’ needs, and with survival as the prime goal—a survival, however, without meaning. The psyche’s grandeur is ignored, the individual’s sense of belonging with nature eroded, for it is at nature’s expense, it seems, that he must survive. One’s greatest dreams and worst fears alike become the result of glandular imbalance, or of neuroses from childhood traumas.

—Jane Roberts (Seth): The Individual and the Nature of Mass Events.

It’s scary how we talked ourselves into absolute randomness, sheer meaninglessness, utmost hostility of life. There’s a place for science but it’s not everywhere, and religion, in the spiritual sense, has a place as well, alas not an omniscient one, either. Explanations and formulæ are of course convenient but we must grow up and get used to the idea that there isn’t always one.

The aggressive feminism somehow misses the point. women found they had no other choice but to reproduce the sterile male logic which has led the world into its present state of malaise. In the process, many of the most successful [women] became, as it were, male-hearted women instead of developing the virtues of the female mind which society so badly needs.

I’ve been studying this Club of Rome report (he!) for a different reason than interest in feminism (I believe in equality, and I’ve said what I wanted to say). However, the authors shared good thoughts, long ago, resembling how many of us seem to think: that men and women are different but equals, and that we need both men and women, and masculinity and femininity. (And of course, all who have other feelings about their coordinates, too.)

When I reviewed my notes for Ram Dass’s Be Here Now I noticed a little list:

And then, two days later, reviewing Covey’s The Speed of Trust, this:

The academic/feminist ideal of love, sex, marriage and family is destructive of everyone’s interests—especially your children’s. Men and women are both encouraged to behave as clowns, as loosely-committed meat mannequins, but only women are given the power of the state to repel their children’s fathers by force, when they are in their turn counseled to blow their families to bits.

And I quote that instead of “feminism is anti-family—anti-woman and anti-man but especially anti-children.” Which I believe should be thought about, too, instead of used to train bite reflexes.

Today we have enormously greater amounts of information and knowledge about man and the universe than our forefathers had, but there are few signs that human wisdom has increased significantly over the last five thousand years.

This quote fascinates me for it seems disturbingly accurate. The only discussion I had about this, however, turned rather heated, with one issue being lack of a good definition of “wisdom.” And yet I believe the common understanding of wisdom suffices to assert that we probably know more than ever now, but that from a standpoint of true understanding, of making wise choices—choices for the good of us all—, there has been no progress. Sadly, even the opposite may be the case.

While lack of progress when it comes to wisdom is yet another great issue to ponder philosophically, it’s actually a rather troubling prospect humanistically.

2045.com/manifest is dystopian to me. Why are we so afraid of dying? Why have we so little, faith? Why does everything organic eventually need to become sterile, pumped up with “technology”?

Our fears may whip us forward, but, oh gosh, must these be fears. So existential they are circular, for all we may need to fear may be these fears—they end up wiping out the life in and around us on their mission to save all the life.

Last year I took on a little side gig, helping with a little manifesto: theothermanifesto.org. That side gig then turned into something a little more important, something for which, independent of official commentary, I just published my own views, in my first (and with that experimental) article on Medium: Humanity and “The Other Manifesto”.

The point for me, then, is this: We seem to really need a vision. And I don’t believe we’ve got much choice on visions, nor the luxury to linger. Check out the manifesto before looking at my random—and much more humble than they may at first appear like—thoughts.

When I grew up I read a lot of comics. One of my favorite series was Yoko Tsuno. What intrigued me most were both Leloup’s super-precise drawing style and then the either amazingly picturesque or incredibly futuristic plots.

Now, coming across [a wonderful] Tumblr entry, I’m as struck as said entry’s author. Check this.

At the time I didn’t realize how non-standard these books were. Me and my brother and sister, we just liked them. But 30 years later I’d still be hard pressed to find a comic book hero like Yoko Tsuno. She’s

I love Yoko Tsuno. (She reminds me of someone else I love.) I think you should check her out. And remember, this series started in the 70s. Chapeau, Roger Leloup.

On Being a Philosopher:

On philosophy as an activity open to everyone.

Self Development Secrets asked me (and a few more people) about the “best self development book you’ve ever read” and I responded with: three.

Destroying Is Not Arguing, or: Why It Would Be Bad If Jesus Was Here.

There’s no proof that life has meaning; therefore, life is meaningless. Wait, what?

For many, perhaps most, women the attempt to gain equality by doing as men do has caused more harm than good. It is even now causing the difference in life expectancy between them and men to decline. The point has been reached where many women, by focusing on their careers and refusing to have children, are literally waging war against [themselves]. The better educated they are, the more true this is. As has been said, the feminist movements’ cathedrals are the abortion clinics on one hand and the adoption agencies on the other .

Women who try to exploit the advantages nature has given them to obtain the protection of men and be fed by them cannot and will not be equal with men. Women who are equal with men will in many ways cease to be women at all.

What seems to fuel the debate is fear, it seems, strong fear; and it is so strong that all the value and beauty and import of differences has long been missing in debates; and what drowns, too, is that equal rights, privileges, responsibilities, treatment, opportunities seem to assume an equality of subjects, of men and women and everyone else, we simply don’t have; and finally we miss the greatly dystopian character of full “equality,” where everyone, of course, must be same to do and receive same.

Even the latest batch of Aibo robots, though being pretty equal, is not treated equally. Differences are beautiful, and unequality is not at all a bad thing—it is only when being exploited. And that is an entirely different problem, pointing precisely where we should really look: at our individual and collective values.

Self Development Secrets asked one hundred people about success and I was one of those one hundred.

That’s it, for a little philosophy, on Google+.

You are here: Home → Archive → 2019 → What Happened on Google+, the Philosophy Archives