How to Just Quit and Travel the World

months ago I quit at Google and left the United States to travel the world. I thought it might be interesting to share a bit about how to do something like this, calling it quits and heading out there, with no set itinerary whatsoever. Even though I don’t know whether it’s all obvious. And even though it’s just one, my own perspective—there are certainly other angles and different incentives. 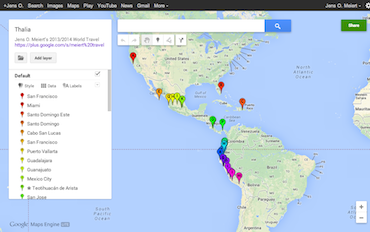 Figure: The travel map after 124 days.

Reverse-engineering the actual events, what ignited everything for me was that one day, it was at the end of 2012, I realized what my purpose is. (Does this sound cheesy? I think it tends to only as long as one isn’t clear about one’s purpose.) While my hypothesis is that the goal of quitting and traveling itself is most important, that was the impetus for me.

Now, what conditions had to be met? I observed two factors:

What else? Don’t look at your status quo, but whether and how you can meet the conditions above. Personally I had to maneuver myself into a slightly better spot to actually proceed. I wanted to make sure I was independent enough, so I informed who I could inform, set expectations with friends, timed my departure to get my yearly bonus paid out and vest a maximum of shares, &c. So if you’re not there yet, think about how you can get closer.

Another important point is certainly how different we are. I’d say that traditionally I’m very independent with people but need a good amount of safety. That first point is good when you want to just get out of wherever, but the second point can restrain yourself. Um. Both can. What I’m trying to say is, some people will have a stronger bond to other people and maybe don’t need much of a safety net. That will make getting to social independence a bit more difficult to attain but help meeting conditions on the monetary side. So mileage varies. 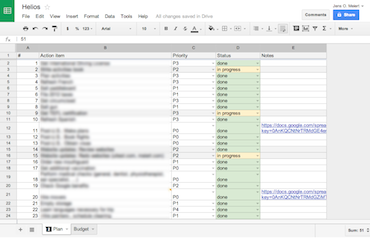 Figure: The one spreadsheet.

Planning and preparation are critical. A former teacher of mine had a saying that “organization is not everything, but without organization, everything is nothing” comes to mind. Here, too, people are different, and you can probably do with surprisingly little prep work, but I argue that it helps. If only to put your mind at extra ease.

The last major area is to have a backup plan. Not one in case you don’t even start to travel, but one with which you can keep traveling. It’s the part of the endeavor that adds that extra credible topping of seriousness to it. The backup plan proves to you that you mean it, and, with the briefing of your emergency contacts, makes it harder to back out of the whole adventure.

As you noticed, I got a bit more vague and superficial. I plan to make this a little series, with one future post entirely dedicated to planning, and others sharing a bit more about dealing with uncertainty, and what I’ve personally done to mitigate.

❧ Maybe I’m not seeing the forest for the trees anymore and this is all self-evident, but maneuvering yourself into the right circumstances and conditions, focusing on thorough planning and preparation, and making provisions for the worst case are crucial steps in order to just kick it. Then, that I can share too, it only takes a few weeks until one’s adjusted to a new and different style of living. I miss my friends and I occasionally even miss my old world, but most of the time I enjoy being “out there,” out here.